NOT FOR DISTRIBUTION OR DISSEMINATION INTO THE UNITED STATES OR THROUGH U.S. NEWSWIRE SERVICES

TORONTO–(BUSINESS WIRE)–Antibe Therapeutics Inc. (“Antibe” or the “Company”) (TSX:ATE) today announced that it has closed its previously announced bought deal public offering of 6,727,500 units (the “Offered Securities”) in the capital of the Company at a price of C$6.00 per Offered Security (the “Offering Price”) for aggregate gross proceeds to the Company of C$40,365,000 (the “Offering”), which includes the full exercise of the over-allotment option by the underwriters.

The Company intends to use the net proceeds of the Offering to fully fund the adaptive Phase III efficacy trial and remaining non-clinical studies for its lead drug, complete IND-enabling studies for its second and third pipeline drugs, advance new anti-inflammatory drug candidates and for working capital and general corporate purposes, all as more fully described in the prospectus. As of today’s date, the Company’s cash balance is C$74 million, including the upfront payment received from Nuance Pharma and the net proceeds of the Offering.

The Offered Securities were offered in the provinces of British Columbia, Alberta, Saskatchewan, Manitoba and Ontario, pursuant to a prospectus supplement dated February 19, 2021 to the Company’s base shelf prospectus dated January 12, 2021 (the “Prospectus”) and elsewhere in compliance with applicable securities laws.

Forward Looking Information
This news release includes certain forward-looking statements, which may include, but are not limited to, the proposed licensing and development of drugs and medical devices. Any statements contained herein that are not statements of historical facts may be deemed to be forward-looking, including those identified by the expressions “will”, “anticipate”, “believe”, “plan”, “estimate”, “expect”, “intend”, “propose” and similar wording. Forward-looking statements involve known and unknown risks and uncertainties that could cause actual results, performance, or achievements to differ materially from those expressed or implied in this news release. Factors that could cause actual results to differ materially from those anticipated in this news release include, but are not limited to, the Company’s inability to secure additional financing and licensing arrangements on reasonable terms, or at all, its inability to execute its business strategy and successfully compete in the market, and risks associated with drug and medical device development generally. Antibe Therapeutics assumes no obligation to update the forward-looking statements or to update the reasons why actual results could differ from those reflected in the forward-looking statements except as required by applicable law.

Neither TSX nor its Regulation Services Provider (as that term is defined in the policies of the TSX) accepts responsibility for the adequacy or accuracy of this release. 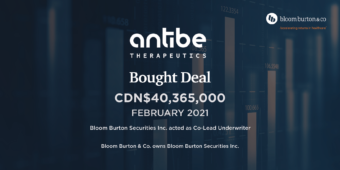