OTTAWA, ON / Business Wire/– February 16, 2021 – Avivagen Inc. (TSXV:VIV) (“Avivagen” or the “Company”), a life sciences corporation focused on developing and commercializing products for livestock, companion animal and human applications that safely enhance and support immune function, thereby supporting general health and performance, announced today that it closed its previously announced offering of 15,000,000 units of the Company (the “Units”) on a “bought deal” basis, at a price of $0.50 per Unit (the “Offering Price”) for aggregate gross proceeds of $7,500,000 (the “Offering”). Bloom Burton Securities Inc. (the “Underwriter”) acted as underwriter for the Offering.

Each Unit consisted of one common share in the capital of the Company (each a “Common Share”) and one half of one Common Share purchase warrant (each whole warrant, a “Warrant”). Each Warrant will be exercisable to acquire one Common Share until February 16, 2024 at an exercise price of $0.75 per share.

The net proceeds of the Offering will be used to fund research and development expenses, sales and marketing costs, product registration, interest expense, working capital and general corporate purposes.

In connection with the Offering the Company paid a cash fee of $525,000 to the Underwriter and issued broker warrants entitling the holders to acquire, in the aggregate, 1,050,000 Common Shares at the Offering Price until February 16, 2023.

The Units were offered by way of a short form prospectus pursuant to National Instrument 44-101 – Short Form Prospectus Distributions to qualify the distribution of the Offered Units in each of the provinces of British Columbia, Alberta, and Ontario.

About Avivagen
Avivagen is a life sciences corporation focused on developing and commercializing products for livestock, companion animal and human applications. By unlocking an overlooked facet of βcarotene activity, a path has been opened to safely and economically support immune function, thereby promoting general health and performance in animals. Avivagen is a public corporation traded on the TSX Venture Exchange under the symbol VIV, and is headquartered in Ottawa, Canada, based in partnership facilities of the National Research Council of Canada and Charlottetown, Prince Edward Island. For more information, visit www.avivagen.com. The contents of the website are expressly not incorporated by reference in this press release. 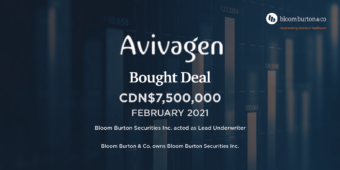