As Canada’s leading healthcare-focused investment firm, Bloom Burton & Co. seeks to develop strong connections to health and bioscience innovation clusters across the country. In this blog series, Matthew Johnson, VP Business Development, recounts his experiences traveling across our health innovation nation. Here’s what he got up to while he was on Canada’s west coast.

Growing up in Ontario, British Columbia had an almost mystical allure. The mountains, the ocean, the vast unspoiled wilderness, and the laid-back culture had many an Ontario kid dreaming of moving out West, skiing or mountain biking all day, getting tattoos and working as a chef in Whistler. Alas, we all grow up.

There is something about B.C., though, isn’t there? Here at Bloom Burton, we’ve worked with many great companies that have their origins in B.C. I recently traveled out West to meet with organizations playing key roles in the creation of the region’s next great life science success stories.

My first stop was to see an old friend of our firm, Kathryn Hayashi, now President and CEO of TRIUMF Innovations. Many Canadians (the non-nuclear physicists, anyway) will be surprised to learn that scientists from all over the globe come to Vancouver to run experiments on one of the world’s largest cyclotron particle accelerators, housed at the TRIUMF national laboratory. Here, they model the birth of stars, reveal the properties of dark matter, and otherwise shape our understanding of the entire universe. They also have a unique ability to create extremely rare isotopes, some with applications in medical imaging and as radiopharmaceutical therapies for diseases like cancer. It is the task of TRIUMF Innovations to thread the needle of commercialization for these potentially ground-breaking discoveries. One TRIUMF spin-out, ATRMS Products, was recently awarded ‘Most Promising Pre-Commercial Technology’ at the BC Tech Association Technology Impact Awards, and has been featured in both Popular Science and Nature.

Just up the street from TRIUMF is the main campus of the University of British Columbia.  UBC is one of Canada’s most productive academic research institutions, consistently ranked in the Top 3 by total research funding received. While there, I met with John-Paul Heale, Managing Director of the UBC University-Industry Liaison Office (UILO), and learned about the latest innovation initiatives within the UBC community.

An important partner to UBC in research and innovation in the cancer field is the BC Cancer Agency (BCCA), which has a network of research and clinical sites across the province. At BCCA, I met with the Director of the Technology Development Office, Sarah Jane Lee, and James Schlosser, Senior Manager of Business Development. Sarah and James described BCCA’s direct role in caring for patients and explained how their agency’s discovery and development of new therapies results in a truly patient-focused approach to cancer innovation. For a province as large as British Columbia, coordination among, and support for the numerous research and innovation agencies and organizations is key. BCCA and many researchers, institutions, and companies in BC and across Canada benefit from the technical and commercialization services offered by the Centre for Drug Research and Development (CDRD), based on the UBC campus. I was pleased to represent Bloom Burton at a dinner event hosted by CDRD to recognize their supporters and stakeholders, and to celebrate their contributions to the sector over the last 10 years.

A bit further inland, the City of Surrey is pursuing a path of reinvention as it adapts to the burgeoning population growth of the last few years. With an eye towards establishing a dynamic, metropolitan city centre, the City has committed to health innovation as a key economic driver. Lark Group, a prominent real estate developer in the region, is leading this effort through the construction and strategic management of the Health and Technology District; a cluster of buildings surrounding Surrey Memorial Hospital intended to foster collaboration between clinical, academic, and business innovators. I toured the first building (7 more to follow!) with Rowena Rizzotti, Vice President of Healthcare and Innovation for Lark Group.  A career health system leader and change agent in the region, Rowena’s drive to fulfill the vision of the District was undeniable! I’ll definitely be keeping an eye on this project going forward.

Finally, I took a day and hopped the ferry from the mainland to Vancouver Island where I connected with the Research Partnership and Knowledge Mobilization (RPKM) office at the University of Victoria, and the Vancouver Island Health Authority. The Victoria area is popular with retirees for good reason – it is as charming and easy-paced as you’ve heard – but these organizations and others on the island are just as ambitious as their mainland counterparts in bringing new technology and clinical innovations to patients. There are some great things happening here.

As is the case anywhere in Canada, it’s the people that make a place special. I’m grateful to everyone who took the time to meet with me during my time in B.C., and I hope to be back soon! 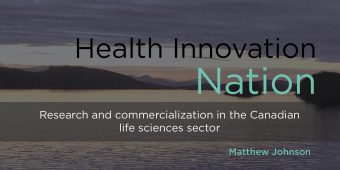