VANCOUVER, BC and HOUSTON, Feb. 22, 2021 /CNW/ – ESSA Pharma Inc. (“ESSA”, or the “Company”) (Nasdaq: EPIX), a clinical-stage pharmaceutical company focused on developing novel therapies for the treatment of prostate cancer, today announced the closing of an underwritten public offering of 4,830,918 of its common shares at a public offering price of $27.00 per share before underwriting discounts (the “Offering”). ESSA granted the underwriters a 30-day option to purchase up to an additional 724,637 common shares. The gross proceeds from the Offering were approximately $130 million.

ESSA intends to use the net proceeds from the Offering to fund clinical activities, chemistry, manufacturing and controls, and research and development, as well as working capital and general corporate purposes. Clinical activities include supporting multiple combination studies with EPI-7386 and anti-androgens, a Phase 2 clinical study, and preparatory work on a Phase 3 confirmatory study.

The securities described above were offered by ESSA in the United States pursuant to a shelf registration statement on Form S-3 (File No. 333-250971) that was previously filed by ESSA with the Securities and Exchange Commission (the “SEC”) and became effective on December 29, 2020 and in Canada pursuant to ESSA’s Canadian short form base shelf prospectus (the “Canadian Base Shelf Prospectus”) dated August 24, 2020 that was previously filed with the securities regulatory authorities in each of the provinces of British Columbia, Alberta and Ontario.

About ESSA Pharma Inc.
ESSA is a clinical-stage pharmaceutical company focused on developing novel and proprietary therapies for the treatment of patients suffering from prostate cancer.

Forward-Looking Statement Disclaimer
This release contains certain information which, as presented, constitutes “forward-looking information” within the meaning of the Private Securities Litigation Reform Act of 1995 and/or applicable Canadian securities laws. Forward-looking information involves statements that relate to future events and often addresses expected future business and financial performance, containing words such as “anticipate”, “believe”, “plan”, “estimate”, “expect”, and “intend”, statements that an action or event “may”, “might”, “could”, “should”, or “will” be taken or occur, or other similar expressions and includes, but is not limited to, the Company’s ability to support multiple combination studies with EPI-7386 and anti-androgens, a Phase 2 clinical study and preparatory work on a Phase 3 confirmatory study and the anticipated use of proceeds from the Offering.

Forward-looking statements and information are subject to various known and unknown risks and uncertainties, many of which are beyond the ability of ESSA to control or predict, and which may cause ESSA’s actual results, performance or achievements to be materially different from those expressed or implied thereby. Such statements reflect ESSA’s current views with respect to future events, are subject to risks and uncertainties and are necessarily based upon a number of estimates and assumptions that, while considered reasonable by ESSA as of the date of such statements, are inherently subject to significant medical, scientific, business, economic, competitive, political and social uncertainties and contingencies. In making forward looking statements, ESSA may make various material assumptions, including but not limited to (i) the accuracy of ESSA’s financial projections; (ii) obtaining positive results of clinical trials; (iii) obtaining necessary regulatory approvals; and (iv) general business, market and economic conditions.

Forward-looking information is developed based on assumptions about such risks, uncertainties and other factors set out herein and in ESSA’s Annual Report on Form 10-K dated December 15, 2020 under the heading “Risk Factors”, a copy of which is available on ESSA’s profile on the SEDAR website at www.sedar.com, ESSA’s profile on EDGAR at www.sec.gov, and as otherwise disclosed from time to time on ESSA’s SEDAR profile. Forward-looking statements are made based on management’s beliefs, estimates and opinions on the date that statements are made and ESSA undertakes no obligation to update forward-looking statements if these beliefs, estimates and opinions or other circumstances should change, except as may be required by applicable Canadian and United States securities laws. Readers are cautioned against attributing undue certainty to forward-looking statements. 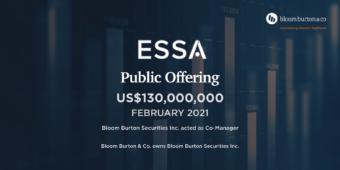