Outperforms the Market (For the Second Quarter in a Row)

In this blog post, the Bloom Burton equity research team summarizes the performance of the Canadian healthcare sector during 2Q-2018, and provides commentary on select stock movements and overall market trends.

Our analysis includes all Canadian publicly-listed healthcare companies, defined as companies that are Canadian headquartered and/or listed on Canadian exchanges, with a market capof C$10 M or greater. Our definition of healthcare includes companies operating in the following areas: therapeutic R&D; commercial therapeutics; healthcare services; healthcare IT; medical devices; medical supplies; diagnostics; consumer health and veterinary. We do not include medical cannabis producers (unless they are developing cannabis-based products under the traditional drug development regulatory process) or companies that operate long term care facilities. Based on these criteria we identified 93 companies.

We classify companies as “Tier 1” and “Tier 2” based on their enterprise values (EV) – Tier 1 companies are those with EV >C$100 M and Tier 2 are those with EV <C$100 MM (for a complete listing of companies included in Tiers 1 and 2 of Bloom Burton’s “blog universe”, please see Appendix 1 at the end of the blog).

Notable advancers in the quarter include:

Notable decliners in the quarter include:

Notable advancers in the quarter include:

A number of small Tier 2 companies made notable percentage gains for reasons we could not discern: Portage Biotech +62.5%; Quest PharmaTech +54.2%; Protech Home Medical +44.4% – perhaps due to volatility of these microcap names.

Notable decliners in the quarter include: 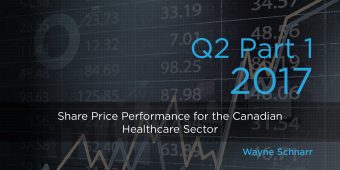