Quiet, no momentum, but Therapeutics – Commercial companies still moved ahead

There was renewed interest in the Canadian healthcare sector in the first half of 2014. The institutional interest was focused on the Therapeutics – Commercial group where there were revenues, profitability and tax-inversion potential. In Q1, there was also broader sector momentum but these Q1 gains were largely reversed in Q2. Q3 has normally been the quiet summer holiday quarter and 2014 was no exception.

The highlighted line in the following table shows what is driving the sector.

What factors could impact the performance of the sector in Q4 and moving forward into 2015?

My personal perspective is that Q4 will be quiet with limited momentum in either direction for this group of senior companies in the Canadian healthcare sector. 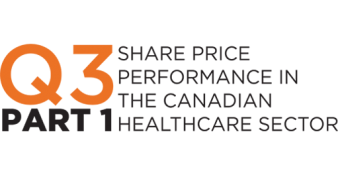