Event summary produced by The Globe and Mail Events team. The Globe’s editorial department was not involved.

Canada’s biomedical sector presents significant growth opportunities for investors, according to speakers at a Globe and Mail virtual summit on November 12. The event, called “Biomedical Boom: Leveraging new Canadian growth opportunities,” brought investors and biotech entrepreneurs together to discuss the current and future potential of the industry.

The webcast began with an interview with Jessica Chutter, managing director and chairman of biotechnology investment banking with Morgan Stanley, followed by a panel discussion among investors. It concluded with a panel of biotech entrepreneurs sharing their start-up stories and insights on growth hurdles and opportunities. Sean Silcoff, technology reporter with The Globe and Mail, moderated the event.

Highlights from the conversation appear below the video:

1) The sector is having a sensational year

Jessica Chutter, managing director and chairman of biotechnology investment banking with Morgan Stanley, said the biotech sector is now a ‘real industry’ offering robust returns to investors. Very little of the recent growth is attributable to COVID-19 though the pandemic is helping to raise the profile of biotech. Most of the gains have been due to technology advancements in drug research and development, she said. Investors are seeing “spectacular” returns of 26 percent for mid-cap companies in 2020, compared to nine percent for the S&P 500, she said, adding investors are attracted by the volatility of biotech stocks for the potential of strong returns.

Biotech companies are often engaged in the development of life-changing drugs and treatments, making the sector attractive for impact investors, or those looking to put their money into greater-good companies, said Didier Leconte, vice-president of investments, life sciences and funds of funds with Fonds de solidarité FTQ in Montreal. Canada’s biotech industry is maturing and new funds are emerging, contributing to year-over-year growth. He said personalized medicine is growing as a focus in biotech, along with drugs and treatments for central nervous system disorders.

3) Canada is participating in the biomedical boom

Financings in the venture and public biotech space are up 75 percent year over year, said Brian Bloom, co-founder, chairman and CEO of Bloom Burton & Co., an investment bank in Toronto. Canadian biotech companies have raised $3.2 billion in financing this year compared to more than $110 billion raised globally. Canada comprises about three percent of the global biotech market capitalization, Mr. Bloom said. Though the biomedical boom isn’t a Canadian-led story, we are participating and benefiting from it, he added, and translating innovations from our universities into globally-competitive companies.

Among Canada’s biotech strengths are robust investment in research and development, especially in hotspots such as Montreal, Toronto and Vancouver, and our universities, said Nancy Harrison, Vancouver-based venture partner with Amplitude Venture Capital.  Canadian biotech companies are strong in regenerative medicine, immunotherapy and targeted therapies – combining biology, chemistry and physics with new and emerging technologies such as artificial intelligence. The pandemic has demonstrated how quickly the sector can move and expand, she added, and investors who aren’t participating will miss out on returns.

Maha Katabi, Montreal-based general partner with Sofinnova Investments noted the lion’s share of biotech financing goes to drug and treatment developments for oncology. Innovators are now focusing on the field of precision oncology, in which a patient’s genetic makeup helps inform their course of treatment. The shift is creating opportunities for biotech start-ups since the clinical trials for such drugs can be smaller and less expensive. Traditionally, only large pharmaceutical companies could afford the cost and time to run clinical trials but that’s changing, Ms. Katabi noted. Another advantage for Canada’s biotech sector is entrepreneurs in the field are more seasoned, having gained experience in front of regulators through their past and current start-ups.

Highlights from the discussion appear below the video:

When Montreal-based Clarissa Desjardins launched her first biotech start-up at the age of 26 the industry was lacking scale. Since that time biotech entrepreneurs have gained experience and are working with a backdrop of ambition and confidence in their ability to tackle just about any disease, Ms. Desjardins said. Among the companies she founded is Clementia Pharmaceuticals, focused on treatments for patients with rare bone diseases that significantly impact their quality of life. At the time, no pharmaceutical companies were exploring treatments and patients had no hope, she said. Her experiences provided an important lesson in the power of discovery and innovation to help patients while creating jobs and investor returns, she added.

2) There’s no shortage of capital

Lloyd Segal, an entrepreneur who has led both biotech successes and failures, is now president and CEO of Repare Therapeutics, a precision oncology company in Montreal. He pointed out there’s plenty of capital for biotech companies in Canada. Finance can be found at home but there are also foreign investors who will buy in provided start-ups have a strong technology platform, world-class leadership and talent. Mr. Segal explained some investments come at a higher cost, such as equity in the company, but the right partner can open up valuable networks and bring timely expertise, he said.

Canadian biotech companies are globally-competitive and Ali Tehrani would like to see his and other start-ups grow to significant scale. As president and CEO of Zymeworks in Vancouver, Mr. Tehrani said a large biotech ecosystem in Canada would keep skilled talent at home and motivate expats to return. Anchor companies would create jobs, security, develop future leaders and the opportunity for new biotech spinouts, he said. The panel of founders discussed the choice faced by entrepreneurs to scale their companies or sell them. At the end of the day, the decision rests on what option will get life-changing drugs to the most people in the shortest amount of time, he added.

The event was presented with support from Bloom Burton & Co. and Baker McKenzie. 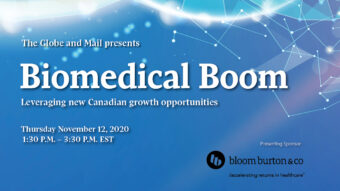