Avivagen Announces Closing of Private Placement of Debentures and Shares

Ottawa, ON – March 28, 2022 — Avivagen Inc. (TSXV:VIV) (“Avivagen” or the “Company”), a life sciences corporation focused on developing and commercializing products for livestock, companion animal and human applications that safely enhances feed intake and supports immune function, thereby supporting general health and performance, is pleased to announce that it has closed its previously announced private placement financing (the “Offering”) of secured debentures (the “Debentures”) for gross proceeds of  $5.678 million.

The Offering was completed by Bloom Burton Securities Inc. as agent (the “Agent”).  As compensation, Avivagen paid the Agent and other sub-agents, collectively, a cash fee of $140,640 and issued common share purchase warrants to purchase up to 703,200 common shares, each entitling the holder thereof to purchase one common share at $0.20 per share for a period of 2 years (the “Broker Warrants”).

Approximately $5,460,000 of the proceeds from the Offering are being used by Avivagen to retire principal and interest outstanding pursuant to existing debentures issued by Avivagen in March and April 2019 (the “2019 Debentures”) and the balance will be used for transaction expenses.

Final approval of the Offering is subject to satisfaction of customary conditions imposed by the TSX Venture Exchange.

Avivagen is a life sciences corporation focused on developing and commercializing products for livestock, companion animal and human applications that, by safely supporting immune function, promote general health and performance.  It is a public corporation traded on the TSX Venture Exchange under the symbol VIV and is headquartered in Ottawa, Canada, based in partnership facilities of the National Research Council of Canada. For more information, visit www.avivagen.com. The contents of the website are expressly not incorporated by reference in this press release.

Avivagen’s OxC-beta™ technology is derived from Avivagen discoveries about β-carotene and other carotenoids, compounds that give certain fruits and vegetables their bright colours. Through support of immune function the technology provides a non-antibiotic means of promoting health and growth. OxC-beta™ Livestock is a proprietary product shown to be an effective and economic alternative to the antibiotics commonly added to livestock feeds. The product is currently available for sale in the United States, Philippines, Mexico, Taiwan, New Zealand, Thailand, Brazil, Australia, and Malaysia.

Avivagen’s OxC-beta™ Livestock product is safe, effective and could fulfill the global mandate to remove all in-feed antibiotics as growth promoters. Numerous international livestock trials with poultry and swine using OxC-beta™ Livestock have proven that the product performs as well as, and, sometimes, in some aspects, better than in-feed antibiotics.

This news release includes certain forward-looking statements that are based upon the current expectations of management. Forward-looking statements involve risks and uncertainties associated with the business of Avivagen and the environment in which the business operates. Any statements contained herein that are not statements of historical facts may be deemed to be forward-looking, including those identified by the expressions “aim”, “anticipate”, “appear”, “believe”, “consider”, “could”, “estimate”, “expect”, “if”, “intend”, “goal”, “hope”, “likely”, “may”, “plan”, “possibly”, “potentially”, “pursue”, “seem”, “should”, “whether”, “will”, “would” and similar expressions. Statements about OxC-beta’s ability to replace antibiotics commonly added to livestock feeds or to fulfill the global mandate to remove in-feed antibiotics as growth promoters and the use of proceeds of the Offering set out in this news release are forward-looking statements. These forward-looking statements are subject to a number of risks and uncertainties that could cause actual results or events to differ materially from current expectations.  For instance, Avivagen’s products may not gain market acceptance or regulatory approvals necessary to fulfill the global mandate to remove in-feed antibiotics as growth promoters and circumstances may require that Avivagen apply the net proceeds of the Offering differently than anticipated. Readers are referred to the risk factors associated with the business of Avivagen set out in Avivagen’s most recent management’s discussion and analysis of financial condition available at www.SEDAR.com. Except as required by law, Avivagen assumes no obligation to update the forward-looking statements, or to update the reasons why actual results could differ from those reflected in the forward-looking statements. 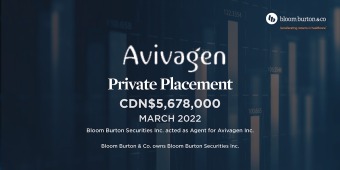