Vancouver, Canada and Houston, Texas, August 27, 2019 – ESSA Pharma Inc. (NASDAQ: EPIX; TSXV: EPI) (“ESSA” or the “Company”), a pharmaceutical company focused on developing novel therapies for the treatment of prostate cancer, is pleased to announce that, further to its previously announced equity offering, it has closed a public offering of equity securities of the Company in Canada and a concurrent private placement of equity securities in the United States for aggregate gross proceeds of US$36 million (the “Offering”). The Offering was led by Soleus Capital and included RA Capital Management as a new investor. Existing investors, including BVF Partners LP, Omega Funds, and Eventide Funds, among others, also participated in the Offering.

The Company intends to use the net proceeds of the Offering primarily to complete the Phase 1 dose-escalation and extension studies, Phase 1 combination studies with recent anti-androgens and initiate Phase II studies. In addition, the Company plans to conduct preclinical studies with EPI-7386 in additional prostate and breast cancer models as well as to continue the development of additional Aniten molecules. According to current plans, the net proceeds combined with the company’s current cash reserves are expected to provide sufficient cash resources through 2022.

The Offering was completed in each of the provinces of British Columbia, Alberta and Ontario by way of a prospectus supplement dated August 23, 2019 to ESSA’s base shelf prospectus dated July 12, 2018 and in the United States on a private placement basis pursuant to Rule 506(c) of Regulation D under the Securities Act of 1933, as amended (the “U.S. Securities Act”). Pursuant to the Offering, ESSA issued a total of 6,080,596 common shares and 11,919,404 pre-funded warrants in lieu of common shares of the Company at a price of US$2.00 per security for aggregate gross proceeds of US$36,000,000. Each pre-funded warrant (together with the common shares, the “Securities”) entitles the holder thereof to acquire one common share at a nominal exercise price for a period of 60 months following the closing of the Offering.

The Offering was undertaken on a best efforts basis pursuant to the terms and conditions of an agency agreement (the “Agency Agreement”) dated August 23, 2019 between the Company and Bloom Burton Securities, Inc. (“Bloom Burton”) as the Company’s sole agent for the Offering in Canada. Oppenheimer & Co. Inc. (“Oppenheimer”, together with Bloom Burton, the “Agents”) acted as the exclusive U.S. placement agent. The Agents were paid a cash commission equal to 7.0% of the gross proceeds of the Offering (except in respect of Securities issued to certain specified purchasers, in which case the cash commission was reduced to 3.5%).

The issuance of the common shares under the Offering constitutes a related-party transaction under Multilateral Instrument 61-101 – Protection of Minority Security Holders in Special Transactions (“MI 61-101”) due to the participation by certain insiders of the Company. These transactions are exempt from the formal valuation and minority shareholder approval requirements of MI 61-101 pursuant to sections 5.5(a) and 5.7(1)(a) of MI 61-101 as neither the fair market value of any securities issued to nor the consideration paid by such persons exceeds 25.0% of the Company’s market capitalization.

ESSA is a pharmaceutical company focused on developing novel and proprietary therapies for the treatment of castration-resistant prostate cancer (“CRPC”) in patients whose disease is progressing despite treatment with current therapies. ESSA’s proprietary “aniten” compounds bind to the N-terminal domain of the androgen receptor (“AR”), inhibiting AR driven transcription and the AR signaling pathway in a unique manner which bypasses the drug resistance mechanisms associated with current anti-androgens. The Company is currently progressing IND- enabling studies and expects to file an IND with the FDA for EPI-7386 in the first calendar quarter of 2020. For more information, please visit www.essapharma.com or follow us on Twitter under @ESSAPharma.

Prostate cancer is the second-most commonly diagnosed cancer among men and the fifth most common cause of male cancer death worldwide (Globocan, 2018). Adenocarcinoma of the prostate is dependent on androgen for tumor progression and depleting or blocking androgen action has been a mainstay of hormonal treatment for over six decades. Although tumors are often initially sensitive to medical or surgical therapies that decrease levels of testosterone, disease progression despite castrate levels of testosterone generally represents a transition to the lethal variant of the disease, metastatic CPRC (“mCRPC”), and most patients ultimately succumb to the illness. The treatment of mCRPC patients has evolved rapidly over the past five years. Despite these advances, additional treatment options are needed to improve clinical outcomes in patients, particularly those who fail existing treatments including abiraterone or enzalutamide, or those who have contraindications to receive those drugs. Over time, patients with mCRPC generally experience continued disease progression, worsening pain, leading to substantial morbidity and limited survival rates. In both in vitro and in vivo animal studies, ESSA’s novel approach to blocking the androgen pathway has been shown to be effective in blocking tumor growth when current therapies are no longer effective.

This release contains certain information which, as presented, constitutes “forward-looking information” within the meaning of the Private Securities Litigation Reform Act of 1995 and/or applicable Canadian securities laws. Forward-looking information involves statements that relate to future events and often addresses expected future business and financial performance, containing words such as “anticipate”, “believe”, “plan”, “estimate”, “expect”, and “intend”, statements that an action or event “may”, “might”, “could”, “should”, or “will” be taken or occur, or other similar expressions and includes, but is not limited to, statements about the intended use of proceeds of the Offering and the expectation as to having sufficient funding through 2022.

Forward-looking statements and information are subject to various known and unknown risks and uncertainties, many of which are beyond the ability of ESSA to control or predict, and which may cause ESSA’s actual results, performance or achievements to be materially different from those expressed or implied thereby. Such statements reflect ESSA’s current views with respect to future events, are subject to risks and uncertainties and are necessarily based upon a number of estimates and assumptions that, while considered reasonable by ESSA as of the date of such statements, are inherently subject to significant medical, scientific, business, economic, competitive, political and social uncertainties and contingencies. In making forward looking statements, ESSA may make various material assumptions, including but not limited to (i) the accuracy of ESSA’s financial projections; (ii) obtaining positive results of clinical trials; (iii) obtaining necessary regulatory approvals; and (iv) general business, market and economic conditions.

Forward-looking information is developed based on assumptions about such risks, uncertainties and other factors set out herein and in ESSA’s Annual Report on Form 20-F dated December 13, 2018 under the heading “Risk Factors”, a copy of which is available on ESSA’s profile on the SEDAR website at www.sedar.com, ESSA’s profile on EDGAR at www.sec.gov, and as otherwise disclosed from time to time on ESSA’s SEDAR profile. Forward-looking statements are made based on management’s beliefs, estimates and opinions on the date that statements are made and ESSA undertakes no obligation to update forward-looking statements if these beliefs, estimates and opinions or other circumstances should change, except as may be required by applicable Canadian and United States securities laws. Readers are cautioned against attributing undue certainty to forward-looking statements.

Neither the TSXV nor its Regulation Service Provider (as that term is defined in the policies of the TSXV) accepts responsibility for the adequacy or accuracy of this release. 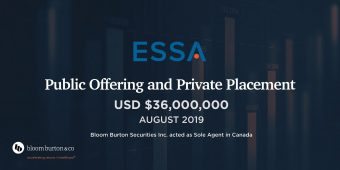