Canada Will Have a Gilead of the North Within 10 Years

Many in our industry remember the golden era during the mid-1990’s when biotech flourished in Canada.

At that time, there was a thriving group of biotech companies supported by a varied cast of players that helped these companies push their projects forward.

This included the Canadian regional arms of all the large pharma’s, which contributed expertise and human resources; a deep group of contract organizations providing valuable support services; and a successful banking industry to help raise capital.

Two of the leading biotech companies at the time exemplified the success of this period: QLT in Western Canada and Biochem Pharma in Eastern Canada.

At their peak, they had market capitalization’s of $8 billion and $6 billion respectively. More importantly, they were fully integrated global players with strong recurring revenues and independently sustainable business plans.

Our Canadian biotech industry has largely suffered and generally not recovered – unlike our biotech brethren in the U.S. – since the global tech and biotech bust in the early 2000’s.

There is, however, reason to believe that within the next 10 years, we will not only see a flourishing biotech industry in Canada but the establishment of one or more fully integrated global biotechnology companies.

The following are key factors to support that:

With approximately 35% of their $1.5+ billion fund of funds committed to biotech, the establishment of Montreal-based Teralys in 2009 was hailed as a major step towards rebuilding the biotech venture capital community.

While it has taken a number of years to see the fruits of their labor, Teralys’ capital has contributed to kick-starting a number of new funds and an overall unprecedented amount of venture capital dedicated to biotech in Canada.

With the recent announcement of CTI Life Sciences II, it’s estimated that seven funds have been created with varying forms of Canadian investment commitments in the last four years with approximately $875 million of capital to deploy. This is excluding the evergreen funds at Le Fonds FTQ and BDC Capital as well as certain foreign VCs who are known to invest in Canada, including Domain Associates, Forbion and Orbimed. 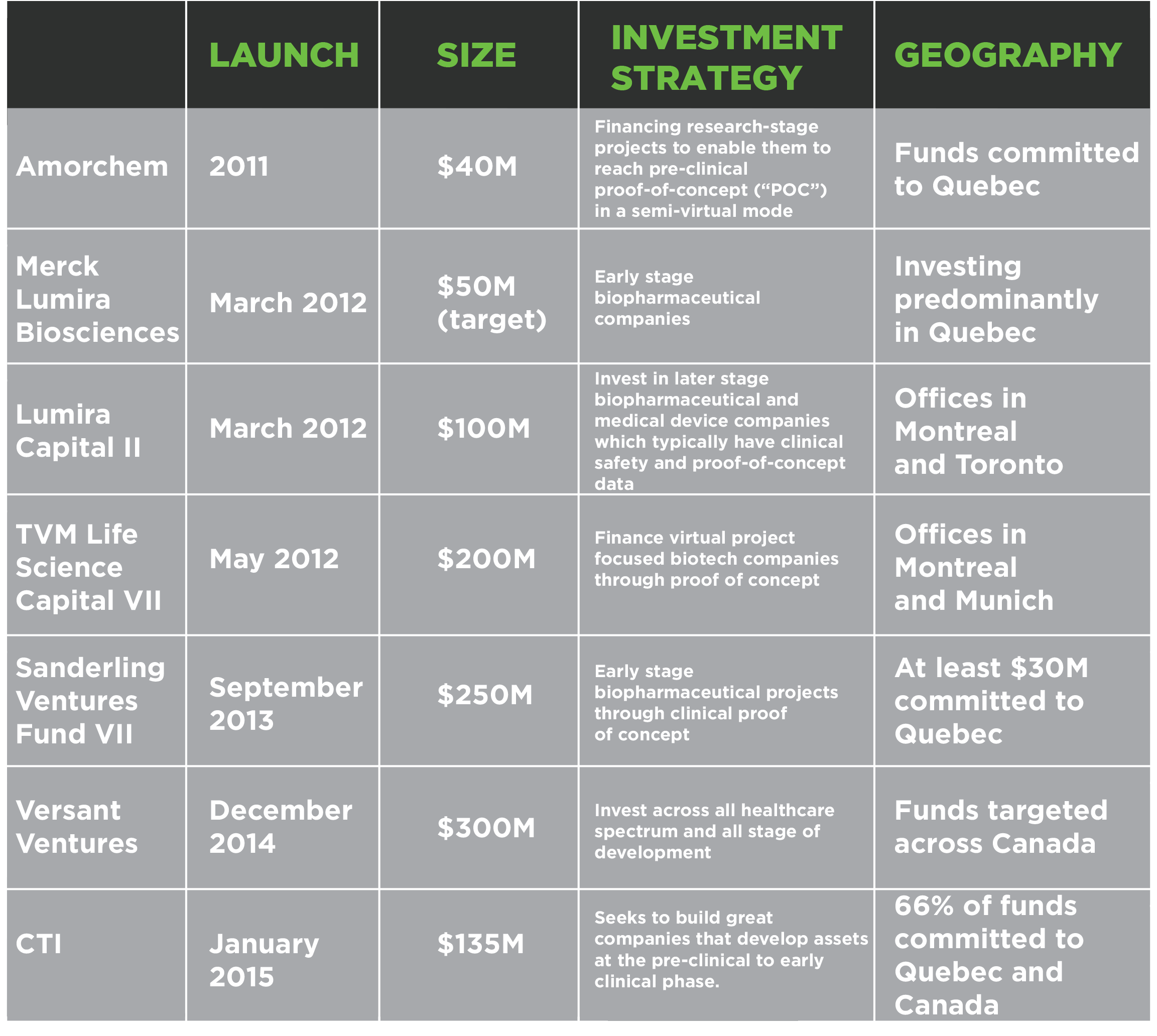 More importantly, the VC community has been rebuilt with a vision and purpose in mind. There are a diversity of investment strategies (incubators, single purpose vehicles, traditional company building) ranging from seed stage to clinical proof of concept.*Source: Public documents including company website and press releases

While early stage capital is plentiful, Canada is still lacking market depth for later stage development companies to find the financing they require. IPO and follow-on financing markets have been routine lately in the U.S. and several Canadian companies have already accessed this market or are in the planning process to take advantage of this. However, domestic support is also required.

There are encouraging signs that this situation is improving.

The growth in the Canadian healthcare sell side has arguably been attributable to three factors:

A number of specialty pharma companies – biotech’s sales and marketing-focused cousins who in-license approved products rather than risking the development of more innovative products – were among the top performers on the TSX in 2014, and that upward trend has continued this year. Success in specialty pharma should result in the broader deployment of capital into Canadian biotech names.

Spending in the United States on specialty drugs,  which have traditionally been developed and commercialized by biotechs,  will likely surpass the spend on traditional drugs by 2018 according to market analytics firm Artemetrx. Specialty drugs are typically higher-cost therapies used to treat complex and chronic conditions. 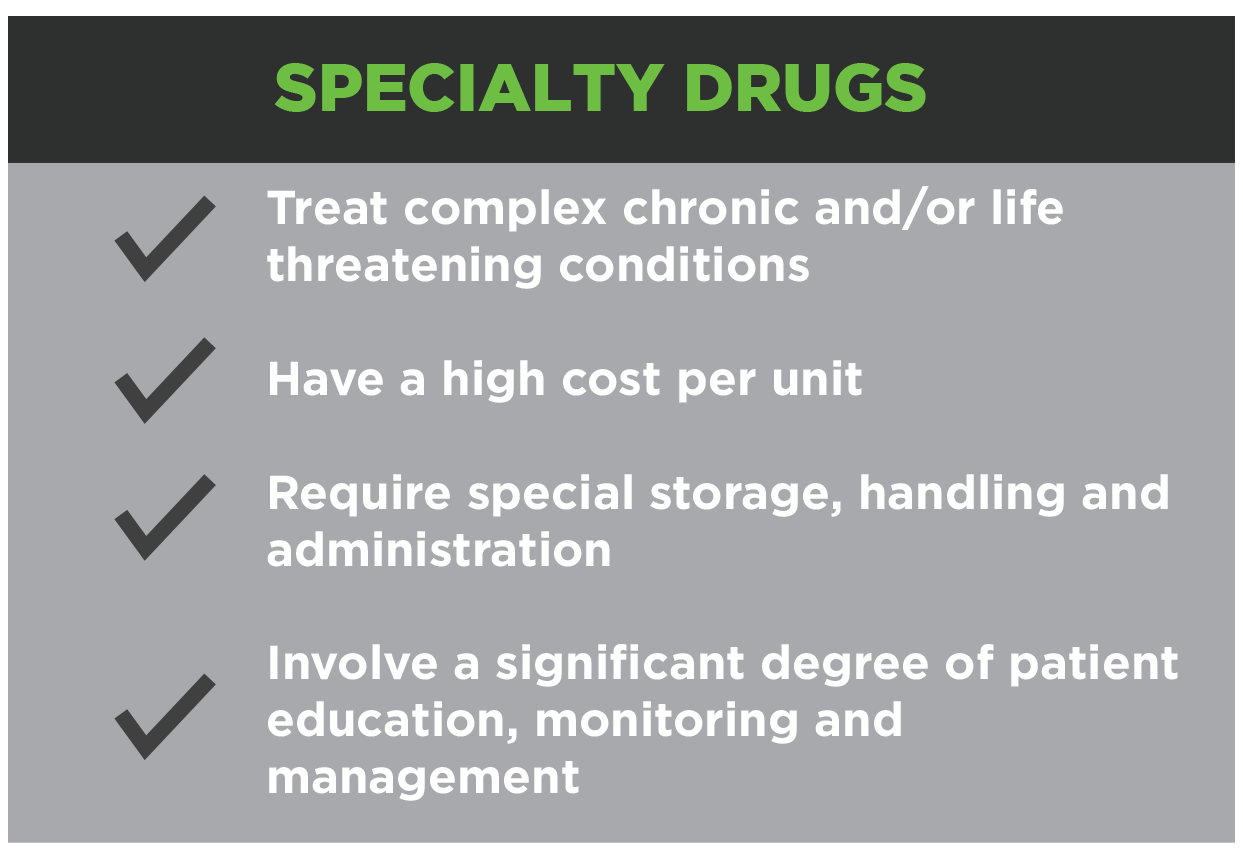 These drugs have several important characteristics that favor the biotech development model: shorter development timelines, lower cost of development, and, most importantly, the ability to sell these specialized and high-priced drugs through smaller targeted sale-forces.

Without the need for large pharma’s extensive sales and distribution systems, biotech companies can now independently launch and grow their more specialized products.

While this has been true for cancer therapies for several years now, new product categories are emerging for smaller biotechs to develop and launch their own therapies.

This couldn’t be more true than in the area of rare diseases as these drugs fully embody these values (potentially very low cost trials and rapid access to market with extremely high pricing).

Drugs for rare diseases have been the launching pad for some of the most successful integrated biotech companies of recent memory including Vertex in cystic fibrosis, Alexion in paroxysmal nocturnal hemoglobinuria, and Biomarin in enzyme replacement therapies.

For a Canadian company developing a specialty drug, they no longer absolutely need a commercial partner with an existing sales and distribution infrastructure. In this new environment, a ‘go-commercial’ strategy is becoming more and more viable.

A crucial factor to building a successful integrated biotech company is a psychological one: the will and the persistence to do it. During the lost decade of healthcare investing from 2003-2012, there were a number of drug candidates and technologies developed successfully. Frankly, this is to be expected from as rich a basin of strong scientific research that Canada produces.

Overall though, successes between 2003-2012 were few and far between resulting in little appetite from both management teams and investors to even take late-stage development risk (in both the Virochem and Enobia examples, the lead products were in Phase 2).

Today, that mindset seems to be changing. There are several companies that have already had commercial success selling healthcare technologies including Novadaq in medical device and the substantial recurring revenue from Prometic’s protein purification platform. Commercial success on the much more lucrative, albeit riskier, drug side should not be far behind.

There is also a growing pool of Canadian companies with the publicly-stated intention of going commercial and another potentially larger pool that may not overtly speak of commercialization, but have the right products to do so.

Are there challenges facing Canadian biotech companies that are competing on an international stage? Absolutely. Canadian intellectual property law, government policy towards biotech, attracting/keeping talent and a poor translation of science efficiency rate can be obstacles that hamper the development of our companies.

But they don’t fundamentally undermine the notion that Canada is gearing up for a new golden era in biotech. In fact, this new golden era should also produce one or more companies breaking out from drug development work to proceed to establish themselves as fully integrated biotechs.

Within 10 years, these emergent companies could surpass the stars of the last Canadian biotech boom and even rival the large biotechs in the U.S.

Roberto Bellini is the CEO of BELLUS Health (TSX: BLU), a Montreal-based company developing therapeutics for rare diseases, starting with conditions that affect the kidneys.