Individual company and sector share price performance in Q3 and Q4 was impacted by volatility in the broader Canadian market.

Despite this background, the Canadian healthcare sector had a quietly positive Q4, led by the two profitable commercial sectors, Therapeutics – Commercial and Services. Investors have been focused on revenues, profits and safety.

I believe that the most important news in Q4 was from Express Scripts, the largest U.S. pharmacy benefit manager,  which negotiated a lower price for AbbVie’s new hepatitis C treatment and, in most cases, will no longer cover Gilead Sciences’ drugs. Gilead has now countered with an exclusive rights deal with CVS, the largest U.S. drug-store chain. All of the new hepatitis C drugs are breakthroughs which will actually cure the disease in many patients. From the longer term pharmaco-economic perspective, the drug costs are easily justifiable. However, from a shorter term budget perspective, some payers including state and local governments cannot absorb the increased drug costs. While drug price negotiations and restrictive formularies are common in many E.U. countries, this is the first time it has attracted such public attention in the U.S., which is still about 35% of the global pharmaceutical market.

In this blog, I am going to comment on the Q4 and yearly performance of the group of 39 Canadian healthcare companies with share prices of $1.00 or more to start 2014.

Therapeutics – Commercial has been driving the sector throughout 2014. 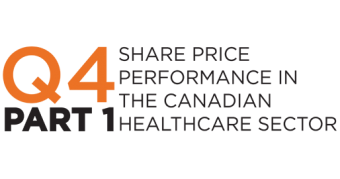